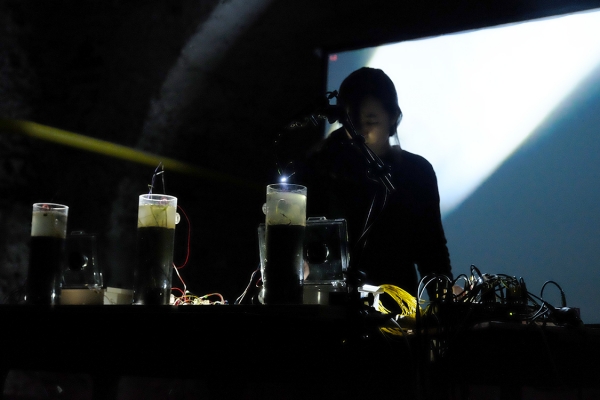 Sonomatter is a sound installation and performance that transforms the bioelectrical signal from microorganisms to sound. The work starts with building a Winogradsky Column, making a small ecosystem with mud and water — generating the electric signal with a Microbial Fuel Cell (MFC), and measuring voltage from microorganisms that are formed in mud. As time proceeds, the microbes will create electricity and eventually die when they lack nutrients. The designed “Bioelectricity-Controlled-Oscillator” circuit consumes the (bioelectrical) energy to control the sound of the oscillator.
This process illustrates a circular relationship between life and death, as life and death share the same material (mud). Interaction between organic matter and natural phenomena — such as soil, water, respiration and oxidation, symbiotic relationship in a microcosm — imply poetics in the microbial sphere. The project is thus not only a metaphorical exploration of the interaction between living matter and natural phenomena, but it also explores the domain of energy harvesting and generating clean energy. The audience is invited to experience the sound from real-time microbial data with handmade “Bioelectricity-controlled-oscillator” circuits.

This project is funded by Seoul Metropolitan Government, Seoul Foundation for Arts and Culture, Munllae Arts Plus 2016